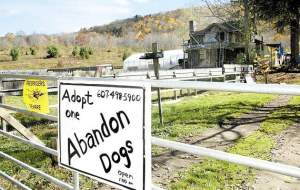 Herta Auslander was found dead in a freezer at her home in Cooks Falls. Police are now looking for her son, Roland "Jack" Auslander, who they believe was cashing her Social Security checks after her death. (Times Herald-Record/MICHELE HASKELL) Photo courtesy of the Times Herald-Record.

Once, when I was out drinking – okay, doing some SERIOUS drinking, but remember, I was a newspaperwoman at the time – I went to the ladies’ room and came out with my miniskirt tucked into my pantyhose.

Luckily, I was alerted to this dumbass move immediately, and was able to correct it before too much harm was done. Nevertheless, it remains an embarrassing memory, and a humbling one.

Because of this, though, it gives me great joy to know I am not alone in dumbass moves in life. Behold: some dumbass news from October 2008.

Reality, only funnier: comin’ up.

Adam Bosch reports for the Times Herald-Record in N.Y., Saturday, Oct. 18, 2008: Tellers at the community bank near the tiny, Twilight Zone-ish town of Cooks Falls, N.Y. hadn’t seen hide nor hair of 100-year-old Herta Auslander in some time.

They’d seen her social security checks hit her bank account, though, and they spotted some activity.

Herta had actually died a year ago, and was nestled snugly with, I don’t know, maybe some pork chops, in her son Jack’s freezer, while he dutifully handled her affairs. What he was purchasing, no one can say, since no one now has seen hide nor hair of Jack Auslander himself.

When police finally investigated, stumbling on the frozen corpse of the poor mother, they found little more than embers in a backyard fire pit and dozens of dogs – some of them vicious – from the so-called dog rescue Herta was supposed to be running.

Now Jack is running, and while the cops aren’t exactly gearing up their quads to race after the guy (apparently they have to defrost poor Herta before they can even tell whether she died the old-fashioned way, or had a little help, if you dig me) the police are looking askance at old Jack’s record.

Personally, I’m surprised he froze Mom. He seems more of the burying type, having buried three ounces of cocaine in his backyard before, according to Bosch’s story. (Jack really IS kind of a dumbass; anybody carrying that much weight in coke really ought to know more tricks how to hide it.)

From the Reuters NewsWire: “Oddly Enough”

A Canadian woman, apparently feeling too tipsy when leaving some social function to drive her own car, enlisted her nine-year-old to take the wheel down a rural Ontario back road. Police, apparently doing a double-take at the itty-bitty driver straining to see above the steering wheel, pulled the couple over and gave the woman a sobriety test, which she fortunately passed.

Lucky for most of us, there are no parenting tests.

Comments abound on the Yahoo! News site – Egad, are people up in arms that a mother would DO such a thing.

I’m thinking the kid was probably psyched as all get out. Can you imagine if YOUR mom got loaded and handed YOU the keys? How incredibly freakin’ happy a moment in your life would that be?

You know, up until the part where the police arrested you?

The Barre Montpelier Times Argus, VT – Oct. 15, 2008 – Gordon Monteith, one would think, at 61 years old, would be old enough to know better before he starting swinging around his .44 Magnum revolver inside his Pearl Street apartment. After all, he had two other guns, so the assumption would be that he knew a LITTLE something about firearms.

Not Gordon. He decided that fateful Tuesday that a little quickdraw practice would be a terrific way to while away the evening. I wonder if he put on some Western-style chaps and a tall Texas cowboy hat, too; I can just imagine him looking at himself in a full-length mirror, racing his best time, pulling the revolver out of its holster.

Gotta be ready to shoot fast, in case there’s a showdown in the middle of the street in Montpelier, I guess Gordon was thinking at the time.

At least, up until the time the revolver went off, and he shot himself in his own leg.

The bullet traveled through the knee, down his leg, and ended up in the bottom of his foot.

2 responses to “The Dumbass News.”