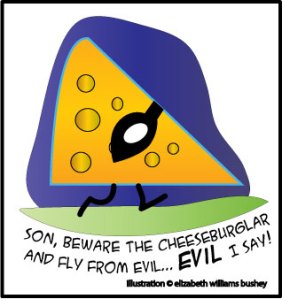 This is how very bizarre my life has become:

My house – as you might expect, since I run a web site for kids, have kids of my own, and perform music for kids – has become what I can only describe as an “Open House” for the neighborhood.

Open, as in all the  parents in the neighborhood must have had a secret meeting and decided: that girl is in her basement all day. What a perfect babysitter!

Two days ago, a kid that no one in our house even knows kept ringing the doorbell – which I ignored, since I was working, and thus, as my uppity grandmother would have said, was not “at home,” a phrase the ancient upper crust used to conveniently use to describe politely: “well, yes, I’m actually here, but get the hell off my property, because I want to be left alone.”

Getting no answer, he started to try to jimmy the lock.

Now I was, well, let’s see: I could say intrigued, or I could say pissed. Either way, I marched up the stairs, calling Tucker, my big black dog – scary, but a secret sissy. I’m not scary, but people don’t know that they ought to be. Kinda ironic, the pair of us.

I threw the door open wide, and put on my best scary Mom face, and apparently I don’t have a very good one, because the kid begged to use the bathroom. “Fine,” I relented. He was in there for an absurdly long time.

It’s no use. It’s Spring Break, and they keep coming and coming in droves. Tomorrow I think I may just throw an impromptu concert, just for the heck of it. Maybe they’ll all run away.

One little girl is straight from Pakistan – or Passkan, as she calls it. She melted my heart today, though – couldn’t turn her away. I’d given her Baba some fabric I’d had, and she’d turned it into the loveliest, rich red sari you could ever imagine.

Okay, so she stays.

Another kid who came today had a great story. “Guess what, Elizabeth? Somebody broke into our house and only stole cheese but he got caught because my dad beat him up.”

I raised an eyebrow.

But there it was, in black and white, in our local newspaper: M’Town homeowner subdues suspect in cheese theft.

Made it right onto page five, color photo of the eye-blackened cheeseburglar and everything. The man was arrested with five different kinds of cheese in his pockets.

I don’t think I have five different kinds of cheese in my house.

But I do think I have at least five different kinds of kids. And they all have the greatest stories.

Some of them are even true.

Want to read the newspaper story about the cheese thief? You can read it right here.