Celebrities are NOT your friends. Stop caring.

(Full disclosure: I don’t know how to turn on or off my own TV.)

A very popular guy, I guess.

Is it just me? Or am I the only one who wasn’t friends with Ed McMahon, isn’t friends with Jon and Kate plus eight, the Olsen twins, and that Perez guy who, for the longest time, I thought was the Paris girl* and everyone was just misspelling his – I mean her – name?

I remember a couple of years ago, when that really blonde, sort of beefy-but-attractive-to-geriatric-gazillionaires, apparently, had a baby, and at every cash register, headlines loomed: “Who’s the father?” Even my oldest, wondered aloud to me: “Who do YOU think is the father?” My daughter even knew the woman’s name, which escapes me now, for the same reason I gave my daughter then: 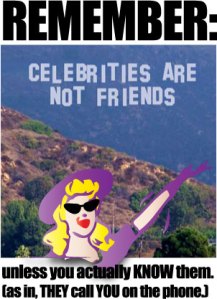 My daughter, as usual, rolled her eyes, as she predicted another rant coming on, so I stopped.

Give me one reason to care about Ed McMahon. He’s dead. I’m sure his family is very sad, as they count their inheritance from all the cheesy-ass commercials he shilled for: Publisher’s Clearing House, that stupid rip-off “Cash For Gold” scheme, and other “your premium will never go up no matter how old you get” life insurance scams.

I’m not sad. I probably would be, if I’d known him. Maybe he was nice; maybe he did all that crappy shit and gave all the money to the poor.

I don’t KNOW, because HE WAS NOT MY FRIEND.

Another set I don’t care about? Jon and Kate. Or their eight. I mean, as humans, and regarding their basic humanity, I care. As soon-to-be children of divorce, my heart goes out to them.

The Olsen twins? I don’t even like them on reruns of Full House when my kids have it on; they’re annoying as tots, and they’re even more annoying now. Have a sandwich, and then please go away; I haven’t seen you in a decent movie … let me think… ever.

If your work becomes good, I might go see it, but otherwise, I don’t give a rat’s ass about your personal life. Call me up for advice, or to vent your issues; my public number is on my Twitter profile page. Intrude on me and MAKE me know you. Then, in pity, I might care. Otherwise? Fail.

I’m STILL not sure what the difference is between Paris Hilton and Perez Hilton; as far as I can tell, they both irritate and bother to distraction everyone I know equally, so I’m pleased to remain as ignorant as possible.

Neither Hilton produces any work of any kind as far as I can tell. They write no good books, they make no good movies or television, they don’t even perform synchronized swim routines. They seem relatively worthless, as far as I’m concerned, although presumably, their friends value them – if, indeed, they have any who care about them as people, and not for their popularity.

I am NOT a friend to either of them, so… I don’t care.

Do I sound jealous? I’m not. I have well-known friends, whom, out of respect, I will not mention here. Being famous is not all it’s cracked up to be.

I myself am relatively famous, actually, but only if you’re about five or six. (See InklessTales.com) I’m a former newspaper columnist, and now a performer – I give concerts all over – but I seriously enjoy my privacy. As, I’m sure, do most famous people.

Ever notice I’ve NEVER mentioned my kids by name here?

I get the feeling it must SUCK OUT LOUD to be a celebrity on the vast scale. Who, going through a divorce, or having just had a baby, or hell – just having made a movie – done their job, after all – wants the indignity of no longer being able to enter a drugstore, a mall, a regular street, without being hassled, subjected to stupid, inaccurate headlines, freakish curiosity on a circus sideshow scale, and otherwise normal human beings completely losing their minds at the mere sight of them?

You think YOU’RE embarrassed on a bad hair day? Imagine if there were twenty photographers outside your door, eagerly salivating to get pictures of your bad hair? What about the day after you polished off that Ben and Jerry’s, and you’re using the ponytail holder to keep your jeans shut? You REALLY want the whole world watching?

How would YOU like to be professionally THIN? AND have the whole world thinking they have the “right to know” your weight?

Remember, people: if a celebrity is not your friend – THEY’RE NOT YOUR FRIEND.

Having personally experienced the odd, off-putting feeling of having people recognize and greet you whom YOU DON’T KNOW, let me tell you: the first couple of times, it IS kinda cool.

After that: it gets a little weird.

I can only imagine what it does to you when it starts locking you in your house, and forcing you to interact only with other celebrities, also locked in that world of weirdness.

Maybe we should just leave them the hell alone – and start paying attention to our real, live friends.

* Speaking of weirdness on a vast scale, the first Google result for Paris Hilton that came up was the EARTH-SHATTERING news that the woman had switched her Blackberry for an Ericsson phone. If you Google me, you get almost 10 pages, but in none of them will you find news of when I myself switched my Blackberry for my indestructible G’Zone phone. You know why?

Because from the looks of it, this is the biggest accomplishment this poor wretch of a girl has managed recently. Sad, really. So very sad.

One response to “Celebrities are NOT your friends. Stop caring.”