CAUTION: These post is rated PG-13 for profanity and naked truth-telling. Consider yourself forewarned.

So. I know that BP stands for British Petroleum, but really – no, really – don’t you think if any random poll were taken lately, your average human being who HASN’T been living under a rock would vote for a name change?

I’ve got some ideas.

“Bumbling Pinheads” or “Bastards of Pollution” (although that sounds almost too cool, like a band) or hey: let’s even change it to an acronym:

Here’s the thing: this fucking oil spill needs to be called something besides “an oil spill.” In fact, words fail me – and any reader of this blog knows: words rarely fail me.

I often wish my father were still alive, but I especially wish he were here today, because he had a fabulous way of making cussing sound charming and funny (he was a Marine; Semper Fi, Do or Die; the difficult we do immediately – the impossible takes a little longer.)

Daddy would be able to come up with some creative and apt phrases for this clusterfuck in the Gulf.  For cluster-fuck it is, no beating around the bush. Personally, I’m just sick and tired of all the sound bites and who should be apologizing to whom, and who should be paying for what.

The whole thing is simply and clearly a clusterfuck of the highest order, and why we aren’t seeing shiny, plastic-haired newscasters proclaiming things like:

“Today’s update on BP’s clusterfuck in the Gulf…”

Even snooty NPR should be naming it a “clusterfuck” in their calm, “we’re so fucking unruffled we don’t ever even raise our voices and we know you just turn us on to sound cool to your girlfriend, betcha didn’t even GET that last joke we told about Heidegger, ha ha ha…”

I mean, HELL! This disaster should have people CRYING, for sweet Samson’s sake, but instead, as I’m perusing the Web for specific details, I see an actual report on a NY Times blog reporting a rig worker, Tyrone Benton, reported leaks in the Deepwater Horizon, the underwater drilling station that “mysteriously” exploded and caused this clusterfuck in the first damn place.

Benton TOLD his bosses. There are over 50,000 pages of e-mails and documents proving it. Like WAY too many people in charge, they put their hands on their ears and went “La-la-la-la-la-la I can’t HEAR you…” because it would have –

They would have had to – OH… shut down. Fix the leak. THEN start back up again.

I SO want to sit down and play some poker with these assholes. Please, please, somebody set up a table and let me play some Texas Hold’Em with these jackasses. They are BAAAD betters.

I have two questions.

Have these greedy motherfuckers NEVER seen a movie in their lives? I mean, come ON. Is it NOT the case, in every movie EVER made, that when some poor schmoe on the factory line sends a memo upstairs to the effect:

“Dear Boss Man: There is a leak in this very big, very dangerous explosive <insert nuclear power plant/enormous dam/evil death ray/weapon of ultimate destruction/oil rig capable of destroying all marine and human life within a mind-bogglingly large distance> which you might possibly wish to be made aware of, because so very much life is at stake.”

… That EVERY Boss Man turns out to be That Stupid and Greedy FuckHead Who Says To Himself and to The Equally Greedy FuckHeads on the Equally Evil and Greedy Board of Evil and Greedy Directors (while they all sit around, chuckling evilly and greedily, twirling their evil and greedy handlebar moustaches): “Ah, let it go, boys! I’m sure it’ll be all right! There’s MONEY to be made! We CAN’T stop PRODUCTION!”

I mean, JESUS. As if this clusterfuck wasn’t bad enough. It’s also a fucking cliché.

This is the one that scares me.

If Benton let the fuckheads upstairs know, and they ignored it, WHY did they?

IS IT BECAUSE THIS HAPPENS ALL THE TIME? HOW MANY FUCKING LEAKS ARE THERE IN THESE RIGS, ANYWAY?

That’s what keeps ME awake at night. That’s the argument I’d put in front of the judge that won’t let Obama shut down the damn drilling.

“Your Honor,” I’d say, if I were President, “You know what? These fuckheads KNEW, and were completely cool, calm and chilly-mostest about their pipes having holes in them like Swiss cheese. Now, Your Honor, what does that tell YOU? Do I NEED to paint you a fucking PICTURE?”

If Hizzoner did NOT see things my way, I think I might just have to take matters into my own hands.

And you know what? The very Constitution of Our United States, if y’all will recall, actually PROVIDES US PERMISSION for REVOLUTION.

If we’re not too covered with tar and feathers to take action by then, that is.

Want an idea of just how much crap is oozing out of the water, really? 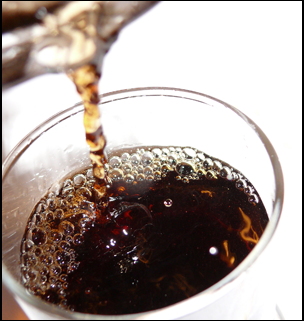 Myanmar, Cuba, Iraq and Syria are the only markets in the world where Coca-Cola isn’t sold*; there are 1.2 billion 8-ounce servings consumed every single day across the entire globe. No surprise, really, right? Coke, although we don’t know it, in all probability secretly runs the world as a semi-benevolent dictatorship (but that’s another blog post.)

Y’all have no problem imagining that amount of fizzy sweetness in the world’s hands, right? Sucking down that carbonated, sugary zippiness, those multi-lingual belches, that dark brown, icy-cold satisfaction that only comes in a red bottle or can? We can all picture that because we all KNOW Coke is everywhere from the sandiest desert to the iciest tundra.

Now: imagine all that Coke is crude oil. 1.2 billion 8-ounce servings, all together now, Hallelujah, testify.

THAT is a CONSERVATIVE estimate of how much gunk is gushing out of the Gulf of Mexico. So far.

In truth, according to the NY Times, it might be twice as much as that.

I shit you not; it took me a solid thirty minutes to come up with that comparison, and I triple checked my math. In reality, Coke falls short of the crude oil by a scant bit, but it helps to give you a way to get your mind around the vast numbers.

You know what? BP has already proved itself completely useless.

They deserve nothing less than to be bankrupted, stripped of existence as a company, any remaining assets to be redistributed towards reparation. The entire oil business needs to be re-examined, restructured, and rebuilt from the ground up – or dismantled, if need be.

We all need to stop dicking around and get responsible. These are grownups acting like helpless children. Screw politeness, politics and petroleum-based products. I’ll walk, instead.

Then you just might have to call in the Marines.