I am SO funny. 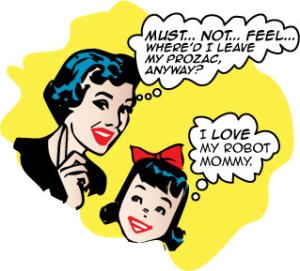 My older daughter, on the cusp of thirteen, possesses a rapier wit that I brag about the way some other mothers brag about their offsprings’ report cards. (An A? What’s an A compared to a keen-edged sword of sarcasm? I mean, really? Which will get you further in life? An A might land you a great job, so you can buy all the Starbucks coffee you want, but being funny will make people buy coffee FOR you. And, for the record, the kid’s running straight As ALSO, nice bonus.)

But she was pissed at me tonight and hurled the worst insult at me she possibly could:

“You know, Mom, you’re not really that funny.”

I was shocked – shocked, I tell you, shocked. Just like that Captain Renault in Casablanca, only really.

“Whaddya mean, I’m not funny? I’m PLENTY funny!” Probably the lamest comeback ever, proving her point. She nailed said point home with a look over the top of her glasses: glasses, I might add, she chose because they LOOKED JUST LIKE MINE!

I recalled the other night, her lanky, thin frame curled up on the futon four feet from my computer. “Mom?” she said, in a little girl voice, “Instead of a bedtime story, could you read me some of your cynical thoughts on everything that’s good in life?”

Hilarious, I thought, but I DID read to her from the blog. AND SHE LAUGHED!

Well. It turns out that Little Miss Still-Hasn’t-Got-Her-Period-Yet-This-Is-The-Longest-Case-Of-PMS-On-Record has “Issues On Her Mind” THAT HAVE NOTHING TO DO WITH YOU, MOM! THEY ARE NONE OF YOUR BUSINESS AND I DON’T WANT TO TALK ABOUT THEM, ohKAY?

No. NOT okay. Would I take this from an adult? No, I would not.

This worked about as well as: “You know: I’m not your Mom. I’m really a vampire with a soul, sent here by Warner Brothers Television to film a Reality TV show to observe how you deal with it.”

I could see the idea of her own mother being a real, live, flesh-and-blood human being pinballing around in her head, banging and pinging and making those cartoon noises, till finally she went “TILT.”

No, really, she really tilted her head in denial of the concept.

Because who the hell else are you going to tear the ass off of when one of your friends rips the heart out of you? Who else is going to take all your bullshit and love you anyway, despite the worst bitchfest you might ever throw?

And now tell me: how the hell is someone supposed to do all that if she’s HUMAN? Get real. Have some common sense, people.

At least until they grow up. Then they find a good therapist. Now THERE’S a bunch that’s not allowed to be human. But don’t get me started on that.

My old shrink was hilarious.